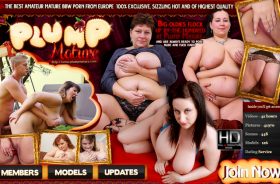 When you watch adult entertainment videos, most of the women that you see are those who have curvy, sexy bodies, they have long legs and flat stomachs, they are what most men fantasize about. However there is a category in adult entertainment sites called BBW or big beautiful women, they are the exact opposite of the women that we are accustomed to see, they have round faces, massive tits, and big booties. There are adult entertainment enthusiasts who are into these types of women as they find them attractive and sexy in their own way, the thought of their cocks going inside their massive pussies turns them on. PlumpMature is the site that features BBWs that know what to do to please their audience and they will surely fulfill all of your fantasies.

The site has been on the web since 2003, they have about 448 high definition videos that you can watch through their fast online streaming service or you can download them and convert them so that you can transfer it and watch it on your device, you can also use their user-friendly mobile version. They have about 41,970 high-resolution pictures that are also transferable and can be downloaded. All of their contents are updated regularly. They have about 126 plump and mature women that you can choose from, their profiles and pictures are available for viewing.

All of their videos have a brief summary of the plot and it has a short introduction of the model that is featured on the video so that you can get to know the model a bit more before watching it. You can rate the model on each video that you watch based on her performance, you can also read the amazing reviews on other sites and it will show you just how incredible their content is, they are also rated based on what they upload and deliver so as a member you are assured that you will only gain access to the best BBW videos.

PlumpMature features BBW’s that are mature yet still sexy and hot in their own right. In one video it showed a mature big woman walking towards a man that was half her age, he was sitting on a chair near the dining table, she then immediately gave him a kiss and started rubbing his stomach over his blue and black sweatshirt. They kissed again as she took his sweatshirt off, he then did the same and took her white blouse off, they were still kissing and sucking each other’s tongue when he reached out to remove her bra and she busily unzipped his pants, he squeezed her massive, saggy breasts and she stood up and removed her black skirt and black underwear; he also stood up and pulled his pants and underwear down.

They kissed each other again as the man rested his back on the wall, the woman immediately went for his cock and gave him a handjob as they tongue wrestled, she then bent over and started sucking his cock, she played and rubbed his balls as she took all of his man meat into her mouth and sucked it. As she used her tongue to lick the tip and the shaft it was visible how his cock got bigger and longer indicating that he was already turned on, the woman then knelt on the long chair and positioned herself to face the other way as she was ready to sit on his cock, because of his massive belly her pussy was not visible so the man lifted it as she was trying to insert his cock into her pussy from behind.

He then spread is massive ass cheeks wide open and made his cock disappear inside of her, as soon as his cock as in she then bounced up and down on him, taking all of his man meat inside of her. She then turned around and used the wall for support as she rode him, her saggy and massive tits were bouncing up and down and was wiggling from the impact of her riding his cock, they even come so close to his face that he would stick his tongue out and lick then and even suck her nipples while she enjoyed herself from the cock riding. The man then took over and made her lay on the floor as he made her spread her legs wide open, he lifted her large belly so that he could see her pussy and continued pumping his cock in and out of her, he played with her tits while he pounded his cock into her.

If you are looking for something different and something fresh then PlumpMature is the site for you, they do not have the usual adult entertainment models that you see, they have the mature, massive beautiful women who will make your prick hard just the same and they can perform and fulfill your sexual fantasies too.